From geochemical point of view, ceramics can be regarded, as thermal metamorphic rocks, a mixture of clay and temper (an additive component to make ceramics tractable; it can be straw, broken rocks or even broken used pottery). The earliest pottery object found in the Carpathian Basin, is around 8,000 years old. In the area of Hungary we have important archaeological sites from Early Neolithic (Starcevo and Körös Culture), Middle Neolithic (Bükk Culture), Late Neolithic – Copper Age (Lengyel Culture) and from Bronze Age too. In a Hungarian-German MÖB-DAAD project we have systematically surveyed the most important Neolithic pottery treasure in Hungary, and have tried to compare the potteries’ composition with those of possible raw material sources.
In an occasional co-operation with the Simón Bolívar University, Caracas, we have investigated pre-Columbian ceramics figurines found in Venezuela. Forty whole or fragmental figurines which originated from the coastal region of the Valencia Lake Basin and the Los Roques Archipellagio, Venezuela were measured. The main question was whether the occupants of the islands used local raw material for pottery production or if they imported it from the continent. Based on some significant element ratios and also on Principal Component Analysis (PCA) of the data, one can clearly distinguish between the objects of two different provenances. 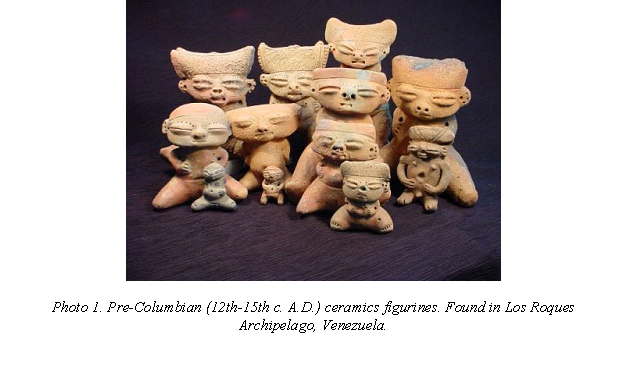 Within a Co-ordinated Research Project, the IAEA organised a Proficiency Test among participating laboratories on Chinese porcelain reference material, with a very positive outcome.

Basic chronological units within the prehistorical periods are named according to applications of different pure metals and alloys (i.e. Copper Age, Bronze Age, Iron Age). Introduction of certain alloying methods could happen to start in different time from region to region, thus determination of alloying ratios can help in workshop identification. In principle, trace elements could serve as “fingerprints” of the raw material (ore), as well as the production procedure (applied coal and flux). Metal being very valuable, however, the old objects were often recirculated that makes the provenance studies much more difficult.
In our first archaeometry research, we have investigated Roman bronze fibulas obtained from excavations of 2nd and 4th century AD sites in Western Hungary. This study was proposed by fellows of the Institute of Archaeology, Hungarian Academy of Sciences. Three alloy compositional groups were found: Cu-Zn, Cu-Zn-Sn, and Cu-Sn, all with a 5–20 % Pb component. 16 fibulas from the 4th century (estimated from dating of coins found in the same graves) were related to 2nd century fibulas based on composition.
In another study, a gilt-brass belt-plate found in Gic, Western Hungary was investigated by PGAA. Considering the atypical motif and the composition of the object, especially the high lead content, the object is regarded as a local imitation of a Byzantine prototype manufactured by an Avar craftsman in the Carpathian Basin.
In co-operation with the University of Bielefeld, we investigated 25 large Roman bronze objects from Southern Italy, such as helmets, shields, jugs and a bucket. In these experiments the regular sample holder chamber was removed, and certain parts of the objects were irradiated with a collimated neutron beam. Based on Cu/Sn mass ratios, the objects show a composition known as “aes campanum”.
In a series of experiments we have analyzed a set of 115 Roman silver denarii, minted during the period 119 A.D. to 194 A.D., in order to determine their silver and copper contents. All these denarii have been found at Romanów near Krasnystaw in Poland. The mass ratio varies from about 0.3 to about 0.5. This significant increase of Cu content, which is impossible to determine by visual observation, probably indicates the course of inflation at that historical period.
In another study, using a collimated neutron beam, we have checked the composition of large English Medieval brass plates and Dutch lead tin spoons in different points. With the combination of elemental composition, obtained by PGAA and the phase structure, measured by TOF-ND, important information on manufacturing technique can be drawn.

A study with similar aims was performed on historical organ tongues. The PGAA and Small Angle Neutron Scattering (SANS) results can help the restorers to reproduce the original Medieval sound of these instruments.

Tomography of objects of cultural heritage <Under construction>

The first known tools at the down of the human history were made of various kinds of rocks, preserved for thousands of years in the natural environment. When doing provenance study of stone objects, we have to compare the composition of archaeological pieces with that of the geological reference material (usually potential raw materials from the Lithotheca Collection of HNM). Already in the Middle Paleolithic (cca. 40,000 years ago) people produced chipped stone tools from local and even from “imported” raw materials, which were hard but relatively easy to process. In the Carpathian Basin there were some characteristic regional raw material sources of different rocks, some of them already characterised by PGAA. Since the original compositions of rocks do not alter significantly during geological ages, and also characteristic of the provenance (source of origin for the archaeological pieces), based on major and trace elements, it is possible to identify groups of different origin, and also to distinguish between macroscopically similar objects, but made of different material.

In the much later Neolithic (cca. 6000 BP), and also in the Bronze Age they started to produce nicely elaborated polished stone tools made of different rocks, such as basalt, greenschist, blueschist or serpentinit. With the help of element analysis it is possible to trace long distance import of the goods, as distant as several hundreds of kms.
During continuous co-operation with the Hungarian National Museum we performed a provenance study of the obsidian archaeological chipped stone tools from different periods found in the Carpathian-region.

The geographical locations of the different sources can be distinguished, and separation of various Carpathian groups was also possible.
Similar studies were done on the provenance of chipped stone tools made of grey flint and felsitic porphyry. Szeletian felsitic porphyry is one of the most famous raw materials used in the Hungarian Palaeolithic. Raw material pieces suitable for chipped stone artefact production have been collected only from natural outcrops situated in the south eastern part of the Bükk Mountains, Hungary. Previously the local raw material was thought to be used only within a 35 km radius area. Supported by PGAA studies, traces of Szeletian porphyry found of about 100 km from the source were identified with great confidence.
Although polished stone tools exemplify a more sophisticated handcraft from the Neolithic period, determination of major- and trace components allow us to make provenance analysis. We have investigated Carpathian origin polished stone tools made of greenschist and blueschist. It was possible to distinguish between the macroscopically similar greenschist and blueschist. In addition, it was also possible to identify the most likely raw material sources in the Alp-Carpathian region.