Multi-component alkali borosilicate glasses are known as most promising host materials for immobilizing high-level radioactive wastes, like U-, Pu-, Th-oxides. We have successfully prepared (65-x)SiO2•xB2O3•25Na2O•5BaO•5ZrO2 matrix glasses (denoted as Bx) and the same compositions loaded with 30 wt% UO3 (denoted as UBx). Both systems have been investigated by neutron diffraction (ND) and high energy X-ray diffraction (XD), Figure 1 shows a characteristic set of structure factor, S(Q) for B10 and UB10 glasses. The short range atomic structure has been analysed by direct Fourier-transformation method and reverse Monte Carlo (RMC) modelling. The RMC minimizes the squared difference between the experimental S(Q) and the calculated one from a 3-dimensional atomic configuration.

It was established that the Si-O network consists from tetrahedral SiO4 units with characteristic first neighbour distances rSi-O=1.60 Å and rSi-Si=3.0 Å. The boron surrounding contains two well-resolved B-O distances at 1.40 and 1.60 Å and, both 3- and 4-fold coordination are present. A chemically mixed network structure is proposed including [4]B-O-[4]Si and [3]B-O-[4]Si chain segments as illustrated in Fig. 2.

The O-O and Na-O distributions suggest partial segregation of silicon and boron rich regions. The highly effective ability of Zr to stabilize the glass and hydrolytic properties of sodium-borosilicate host materials is argumented by the network forming role of Zr ions. For the U-O correlations two distinct peaks were resolved at 1.84 Å and 2.24 Å, and for higher distances well pronounced correlations are present at ~4.3 Å and at ~6.4 Å. Furthermore, significant atomic pair correlations have been revealed between uranium and the network former Si and B atoms centred at 3.4 Å and 3 Å, respectively, and for the modifier Na ions at 3.7 Å and Zr at 3.8 Å. From these finding we have concluded that uranium ions take part in the network forming, which may be the reason for the observed good glass stability and hydrolytic properties.

Chalcogenide glasses exhibit a variety of interesting properties making them applicable in a wide range of fields. Neutron diffraction measurements have been performed on GexSb(40-x)S(Se)50Te10 (x=20 and 27at.%) glasses. Traditional Fourier transformation technique and the reverse Monte Carlo (RMC) simulation of the experimental data have been applied to model the 3-dimensional atomic configurations. The glassy samples were synthesized by the conventional melt-quenching method from 5N purity elements.
The syntheses were performed in evacuated quartz ampoules (10-3Pa) using a rotary furnace. The specimens were heated up to 950°C, kept at this temperature for 24h meanwhile the furnace was rotated for homogeneous melting.

Neutron diffraction measurements were carried out by the 2-axis 'PSD' diffractometer (l0=1.068 Å) at the 10 MW Budapest research reactor. The powder specimens of about 3-4 g/each were filled in cylindrical vanadium sample holder with 8 mm diameter. The neutron structure factors, S(Q)’s were revealed in a momentum transfer range, Q=0.45-10 Å-1. Structure factors, partial pair distribution functions, coordination numbers and bond-angle distribution functions can be obtained by RMC simulation using experimental structure factors. The partial pair distribution function and bond-angle distributions indicate that basic building units are tetrahedral and trigonal units and they point out the existence of homopolar bonds in these units. With increasing the Ge-concentration we don’t observe strong structural changes, but within S and Se additives we observe a significant difference between the two type of samples. 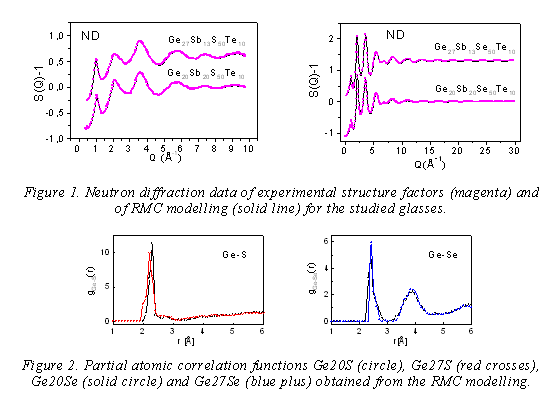 Zinc boromolybdate materials are known as low melting dielectric materials and they have high potential in several applications, due to their stable and unique structure with favourable optical properties. The structure characterization is challenging, as far as this system contains the conditional network former MoO3 and the traditional network former B2O3. Neutron diffraction study has been performed on xMoO3-50ZnO-(50-x)B2O3, x=10, 20, 30 mol% glasses, and the experimental data were simulated by reverse Monte Carlo modelling. The first- and second neighbour correlation functions, atomic distances and coordination numbers have been revealed, not yet reported for this system. It was found, that the first neighbour distances do not depend on concentration within error of limit, the actual values are rB-O=1.38 Å, rMo-O=1.72 Å and rZn-O=1.97 Å. ZnO proved to be a network former, not a modifier as it is often reported in the literature for similar systems. From the analyses of the obtained structural parameters we have concluded that the glassy network is formed by trigonal BO3 and tetrahedral BO4, MoO4, ZnO4 groups. Concentration dependence was found for the BO4/BO3 fraction, it increases with increasing B2O3 content. We have concluded that only small amount of boroxol ring is present, therefore we suppose that the network is formed by organization of BO3 and BO4 groups into superstructure units, and partly by separated BO3 triangles. The BO3 and BO4 units are linked to MoO4 or ZnO4, forming medium-range order by mixed [4]Mo-O-[3],[4]B, [4]Mo-O-[4]Zn, [3],[4]B-O-[4]Zn  bond-linkages. 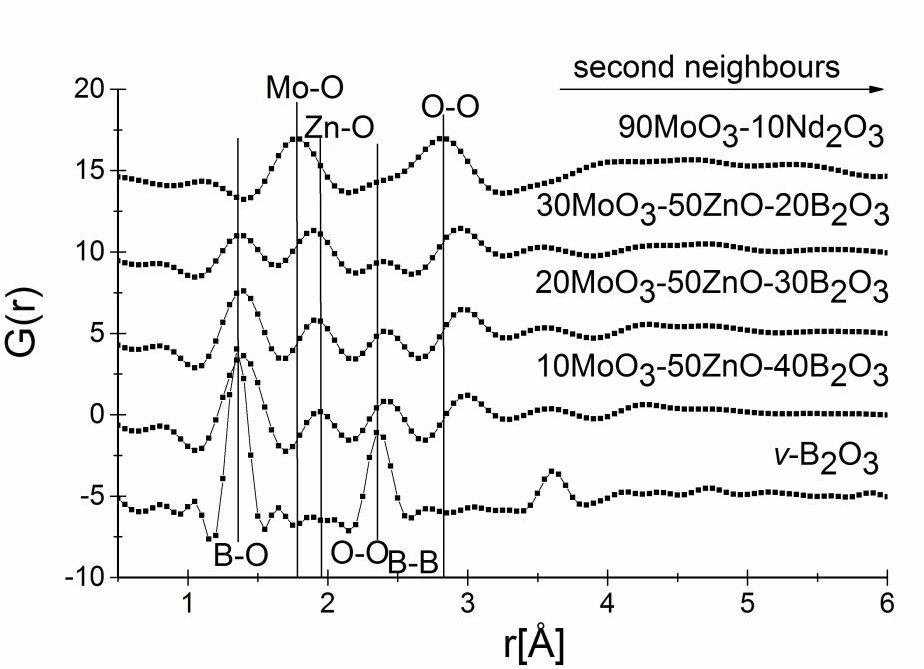