The in-beam Mössbauer spectroscopy facility is being installed at the Neutron guide hall of the Budapest Research Reactor by researchers of the Centre for Energy Research, HAS. The instrument is not yet part of the user program.

The instrument can be used online, but during reactor shutdown, activated short-lived Mössbauer sources are also planned to be utilized. During the online operation, a beam of guided cold neutrons produces the Mössbauer transitions continuously. The cold neutron flux at the target position at the end of the focused supermirror guide is ~109 n cm−2 s−1. The beam shutter is installed at the beginning of the 7 m long guide section to avoid the high flux gamma radiation caused by the closed beam shutter. The experimental area is shielded by concrete walls from the rest of the guide system both at the incident and exit ends of the guide. Near the guide end, a collimator system composed of lead and 6Li-enriched polyethylene is placed in the opening of the concrete wall to minimize the unwanted background radiation. The diameter of the beam, passing through this collimator system is about 1×1 cm2 at the target position. The neutron beam enters the cryostat through a thin vertical window (made of Mylar and beryllium) and exits on the cryostat's opposite window. The cryostat can be operated in the temperature range of 3–360 K with liquid helium or nitrogen cooling. The maximum areas of the Mössbauer source and absorber are about 1 cm2 thus the available maximum source strength is about 1 GBq. The sample holder is fixed to the end of a stainless steel tube, which holds the moving rod mechanics as well as the absorber at its bottom. The Mössbauer transducer (Wissel MVT 1,000) is fitted to the top of the specifically modified cryostat (Konti-IT-Cryostat-Spektro-He product of CryoVac) and an aluminum moving rod connected to the transducer vibrates the Mössbauer source in the neutron beam.
For the acquisition of the Mössbauer spectra two detectors, a Na(Tl) and an HPGe, can be used in absorption geometry. The HPGe detector enables us to study the low energy prompt gamma spectrum in high resolution in order to be able to select the energy window for the Na(Tl) detector. The detectors can be mounted below the cryostat with their axis perpendicular to the incident neutron beam. The data acquisition system is equipped with an 8K channel Wissel CMCA-550 USB pulse height and Mössbauer analyzer, which can be connected to a personal computer with a USB port. Transducer driving electronics, a function generator, and high voltage power supplies complement the system, all placed in a NIM BIN. A schematic drawing of the equipment is given in Figure 1. 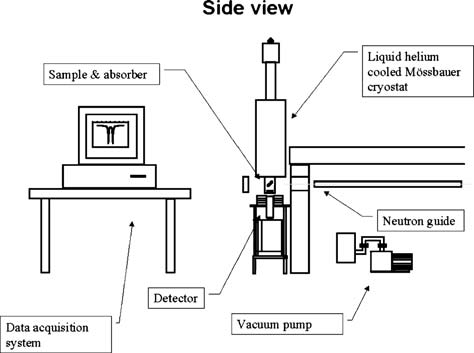 Prospective prompt-gamma nuclei for in-beam excitation were identified. The best candidates are (40K, 56Fe, 66Zn, Gd, Er, Dy, Yb, Hf, W). We have estimated the expected event rates with the parameters of our Mössbauer system. For the mass of Mössbauer nuclei in the source and absorber we used 0.001 mol, while for the recoilless fractions we assumed 0.1 for both of them. The Mössbauer absorption cross-section was set to 10−19 cm2 in all cases. For both the source and absorber nuclei the natural abundances were taken into account. The natural elemental gamma-ray production cross-sections σg were taken from our experimental results. It can be clearly seen that the rare earth elements give the smallest uncertainty for the same length of measurements. Some of the light elements can also be studied, however, in the case of potassium enriched ones, an absorber would be needed to achieve better statistics.
Besides the prompt gamma sources, we can make use of the short-lived continuously activated sources. The corresponding Mössbauer nuclei are 153Er, 166Er, 175Lu, 186Os, 191Ir, 192Ir, 195Pt and 197Au. They can also be used in-beam similarly to the prompt gamma rays. Longer half-life nuclei can be activated in the reactor and used during the reactor shutdown periods (141Pr, 127I, 129I, 181Ta, 182W). Fields of applications include: biological systems (40K prompt excitation), catalysts (193Ir, 196Pt, 197Au short-lived continuous activation), HTC superconductors (141-Pr reactor shutdown, Dy prompt activation), geological samples, and magnetic layers (Gd, Er, Dy, Yb prompt and short-lived activation), the chemical behavior of the nuclear waste of 129-I (127-I reactor shutdown), corrosion in nuclear and traditional power plants (57Co, reactor shutdown) or in-beam produced 57Fe to study chemical changes induced by radiation in solid states.