The standard PGAA experiment has been modified in such a way that we placed a continuous-flow catalytic micro-reactor instead of a normal specimen into the neutron beam and recorded the emitted gamma radiation by a Compton suppressed Ge detector. By performing careful reference experiments, we were able to accurately quantify the hydrogen uptake of catalysts (palladium, palladium-based intermetallic compounds as well as complex metallic alloys) in alkyne hydrogenation, being an important group of industrial processes. From the experiments we concluded that – when pure palladium catalysts are used – unselective alkyne hydrogenation proceeds over palladium in the form of hydrogen-saturated β-hydride, whereas selective hydrogenation was independent of the amount of dissolved H in palladium. Since the subsurface hydrogen content is critical for the selectivity, the observed lack of correlation with bulk H can be explained with the occupation of subsurface sites by carbon atoms (in line with our earlier in situ XPS results) disturbing the equilibrium between surface and bulk-dissolved H. When palladium intermetallic compounds (e.g. PdGa, Pd3Ga7) were used as catalyst, the modified electronic structure of these materials with filled d-band resulted in the weakening of hydrogen adsorption and no hydrogen was absorbed in the subsurface and bulk of these materials, giving rise to selective hydrogenation. A similar situation was observed with a noble metal free iron-based complex mixed alloy sample, making it to a cheaper alternative to the Pd system.

In summary, we have demonstrated by means of PGAA experiments and DFT simulations that although the presence of surface and subsurface carbon accumulated under selective alkyne hydrogenation conditions implies a strong restructuring of the near-surface hydride phase, the bulk of palladium can still be populated by hydrogen. Due to the middle-sized barrier of 0.8 eV for hydrogen emerging from the bulk through Pd−C to the surface, bulk and surface is still in a dynamic equilibrium, at least at the time scale of hydrogenation. The reaction rate of selective hydrogenation is, nevertheless, independent of the H/Pd ratio of the bulk. 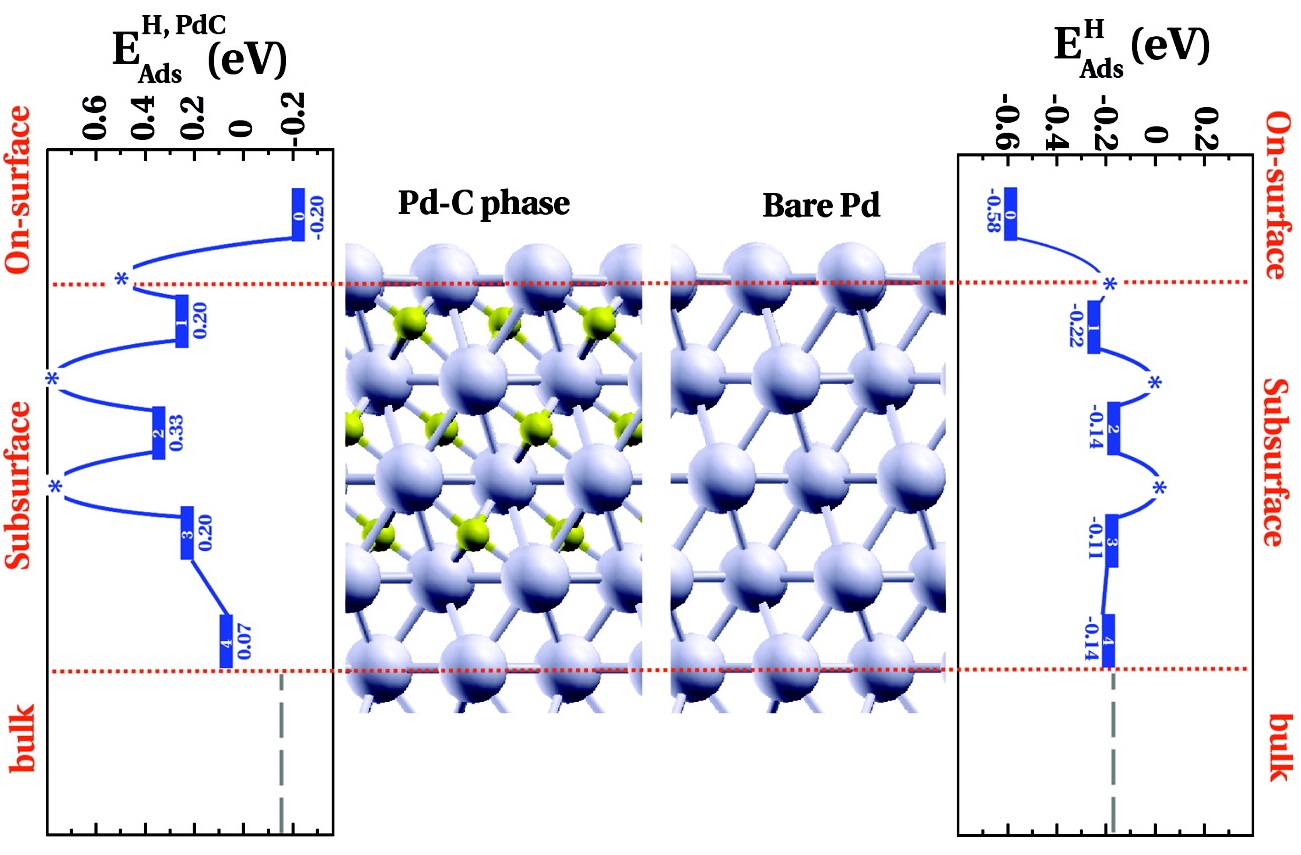 The binding energy of surface H is strongly reduced in the presence of Pd−C, and hence, its coverage is low. On the other hand, during unselective total hydrogenation, the subsurface is populated by hydrogen, rendering the surface concentration of H high. The importance of subsurface hydrogen for alkane production is in accordance with recent results of Wilde et al., showing that the hydrogenation of olefinic double bound requires the presence of weakly bound subsurface H. Hence, it is clear that electronic effects influence coverage; however, the reverse of this is also operative, making the differentiation of cause and consequence sometimes difficult. The combination of in situ techniques and DFT calculations, however, undoubtedly allows a better understanding of the stability, local concentration, and dynamics of H on the Pd catalyst and in its bulk at the conditions of selective alkyne hydrogenation. In a more general sense, theoretical insights in tandem with in situ spectroscopic analytics are truly a powerful combination to understand heterogeneous catalytic processes on the desired molecular level.