In the framework of the Joint Research Program RADCON between the Visegrád Group Countries (V4) and Korea, researchers of the Centre for Energy Research, Hungary, the Institute of Fundamental Technological Research of the Polish Academy of Sciences, Warsaw and the Yonsei University, Seoul  successfully reconstructed the microstructure of concrete specimens by taking advantage of the complementary nature of X-ray and neutron computed tomography (CT). Neither tomogram alone was suitable to properly describe the microstructure of concrete specimens. However, by merging the information revealed by the two modalities, using advanced image segmentation, noise reduction, and image registration, void, aggregate and cement paste phases were successfully captured down to the spatial resolution of the images, even though the aggregate commonly consists of multiple minerals. These served as inputs to the image-based finite element analysis to demonstrate the effects of microstructure on stress concentration and strain localization.

Load-bearing structural materials, such as metals or concrete are engineered to withstand forces of given strength and orientation during their entire service life. The design is usually supported by finite element calculations, where the properties of small volumes within the material are individually considered. The computational techniques are already mature and reliable to predict the behavior of metals under loads, where homogeneity can be assumed. However, inhomogeneities, cracks, inclusions and voids have to be individually mapped in non-homogeneous materials.

Concrete, the material used in the largest amount by mankind, is, however, a much more complex material, where the microstructure is the topmost important characteristics to understand material behavior. The compositions, sizes, shapes, and arrangements of the various components present in concrete, constitute a complex microstructure. Owning to the inherent complexity and uncertainty of phase distinction, characterization of the microstructure is challenging, and therefore various experimental and numerical approaches have been developed in the past to quantify the microstructure of concrete.

Recent advancements in volumetric imaging technologies enabled us to capture the concrete microstructure in 3D by employing X-ray and neutron computed tomography (CT). X-ray attenuation coefficients mainly depend on the atomic number and the material density of the material, therefore void spaces in concrete provide high contrast and therefore can be accurately identified. Unlike X-rays, the attenuation of a neutron beam is rather sensitive to the hydrogenous components.

The goal of the present study was to reconstruct the microstructure of concrete specimens with polymineral aggregates and use it for finite element calculations. This was achieved by making use of the complementarity of X-ray and neutron CT images in conjunction with image segmentation, noise reduction, and image registration techniques. Fine aggregates consist of quartz, while coarse aggregates are gabbro rock fragments containing several mineral phases. This composition results in various attenuation coefficients among aggregate clasts, and even inside gabbro rock fragments. 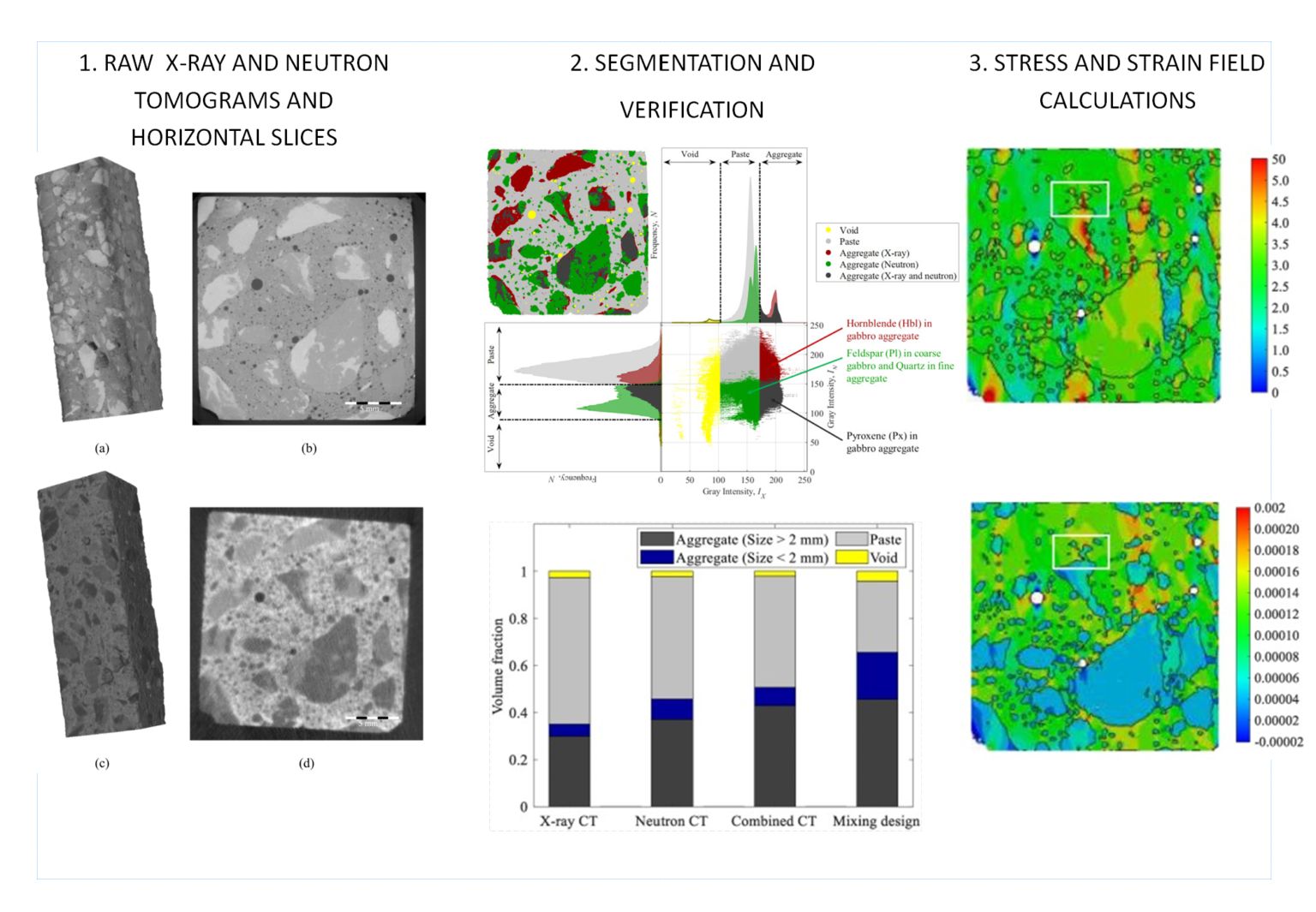 The study concluded that advanced imaging techniques are well applicable to derive an accurate representation of 3D concrete microstructure, and ultimate to obtain realistic internal stress calculation results even for such a complex composite material.

This work was supported by Visegrad Group (V4)-Korea Joint Research Program. HK, TR, and KP acknowledge the supports from the National Research Foundation of Korea funded by the Ministry of Science, ICT & Future Planning (grant number: 2017K1A3A1A67015884). The Hungarian co-authors acknowledge the project No. 127102 RADCON that has been implemented with the support provided from the National Research, Development and Innovation Fund of Hungary, financed under the NN_17 V4-Korea funding scheme. The Polish co-author was supported by the Polish National Centre for Research and Development (Project V4-Korea/2/2018).