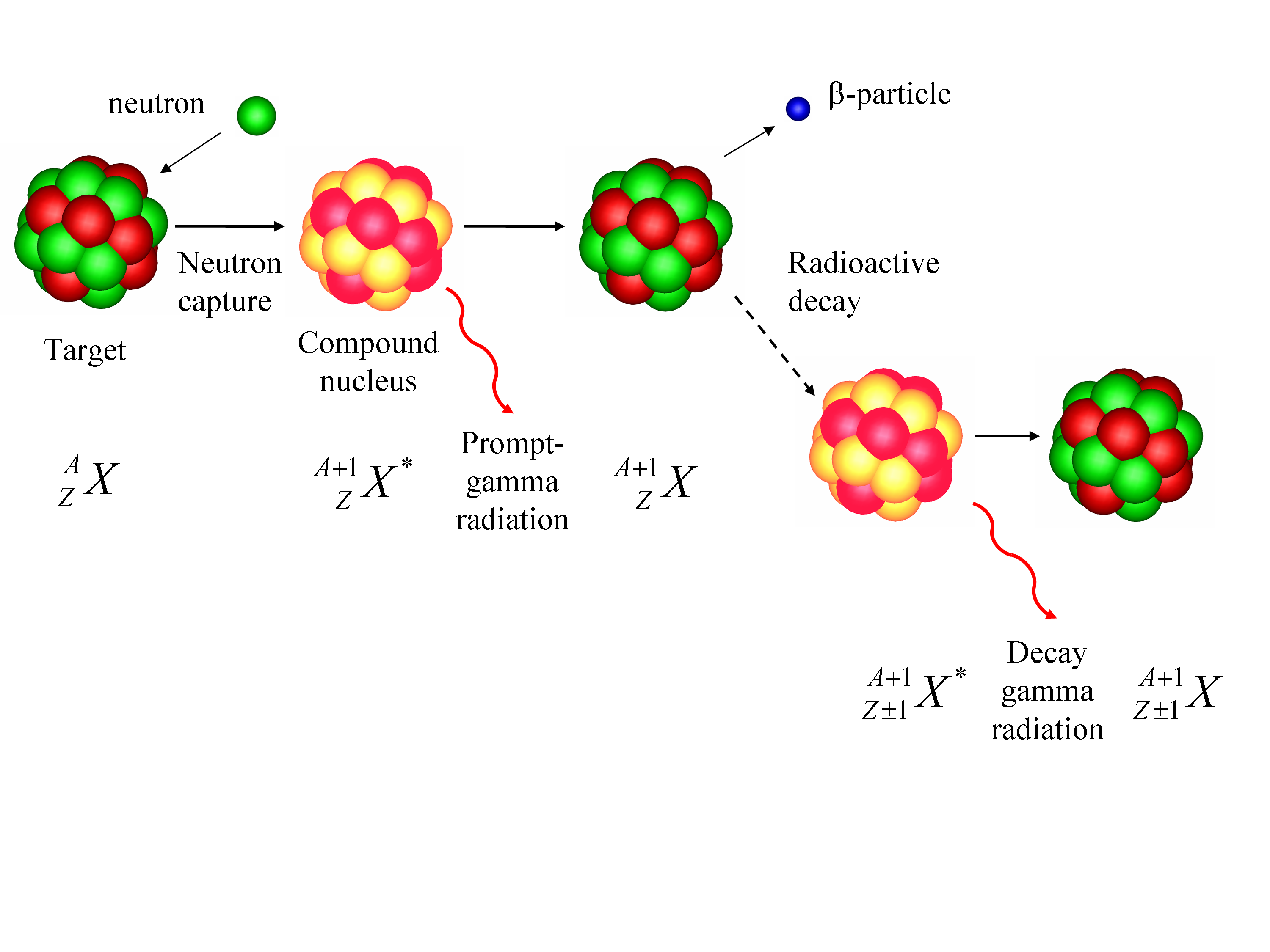 Whenever a nucleus captures a neutron, a compound nucleus is formed. The excitation energy is close to the binding energy, i.e. the kinetic energy of the neutron is negligable (in the meV range), when irradiating with slow neutrons. This excitation energy is between 6 and 10 MeV for about 80% of the stable nuclei. The decay of the compound nucleus takes place in about 10–16 s. The nucleus reaches its ground state, typically in 10–9 – 10–12 s, by emitting 2–4 gamma rays in a cascade. Gamma rays are called prompt, if their decay times following the capture, are much shorter than the resolving time of the detection system, which typically is in the range of 10 ns to 10 μs. Prompt gamma radiation is characteristic, i.e. the energy values of the gamma rays identify the nuclide, and their intensities are proportional to the number of the atoms. Most nuclides emit hundreds (sometimes several thousands) of different energy prompt gamma-rays. When the ground state reached after the de-excitation is not stable, radioactive decay radiation (typically beta-decays and electron capture followed by gamma-rays) with a given half-life will also be emitted.

The probability of a reaction is characterized by the cross section. The capture cross section is highly dependent on the neutron energy. For slow neutrons the most important energy dependence is the so-called 1/v law. This dependence continues until the first, so-called resonance in the eV – keV range. In PGAA, worth introducing the quantity "partial gamma-ray production cross section", which is the product of the isotope's natural abundance, the thermal neutron capture cross section for 2200 m/s-neutrons and the emission probability of the gamma-ray with the given energy. This is proportional to the count rate of the analytical peak.

Prompt gamma activation analysis (PGAA or PGNAA) is a nuclear analytical technique based on the radiative neutron capture, for non-destructive determination of elemental and isotopic compositions. The sample is irradiated in a neutron beam and the gamma-rays from the radiative capture are detected. All elements can be analyzed (except helium), without any prior information on the analyte. Contrary to the instrumental neutron activation analysis (NAA), the irradiation and the detection is simultaneous. The energies and intensities of the peaks are independent of the chemical state of the material; hence the analytical result is free of chemical compositions. Both neutrons and gamma-rays are highly penetrating, therefore – in contrast to many instrumental elemental analysis techniques – the average composition of the entire illuminated volume is obtained. Every step of the measurement and the evaluation can be described with statistical methods, and the uncertainties of the concentrations can be readily estimated from one measurement. Geological, archaeological, environmental samples, artifacts, minerals, metals, glasses, catalysts, ceramics are routinely analyzed, as well as samples from the industry. Measurements for material science, nuclear technology, nuclear astrophysics and nuclear structure  are also regularly carried out.